The museum’s new permanent exhibition The World of the Brno Bourgeoisie Around the Löw-Beers and the Tugendhats combines elements of architectural history with the lifestyle of the bourgeoisie in Brno during the second half of the 19th century and early 20th century. The exhibition occupies 10 rooms on the first and second floors of the villa. Because the original furniture was not preserved the villa is not, however, designated a historic building of Art Nouveau architecture.

The prologue to the exhibition is dedicated to Brno’s rapid growth during the second half of the 19th century as a result of the abolition of the city’s walls and the advent of industrialisation. Visitors will also learn about genealogical information on the Löw-Beer family, the development of the residential colony in Černá Pole and the history of the villa itself. Finally the exhibition examines Brno’s textile industry, of which Jewish businessmen enjoyed a significant share, and looks at how the Löw-Beer family assumed a prominent position among them.

In 1929 Alfred Löw-Beer gave his daughter Greta, who was married to Fritz Tugendhat, a plot on an upper section of land by Černopolní Street to construct a family house. The result was Villa Tugendhat, designed by architect Ludwig Miese van der Rohe, one of Europe’s best known buildings of modern architecture. Part of the exhibition is also dedicated to architect Ernst Wiesner (who was originally commissioned to design the Tugendhat’s family home), the eventual architect Miese, the timeless architecture of Villa Tugendhat and its recent restoration. In this section of the exhibition visitors can also feel what it was like to be the owners of Villa Tugendhat and sit in replicas of Ludwig Miese’s and Lilly Reich’s original seating furniture.

More than a dozen structural models – created by students of the Faculty of Architecture of the Technical University in Brno – showcase the development of architectural art from late historicism through Art Nouveau to functionalism. The exhibition was created in close partnership with the Villa Tugendhat – the Brno City Museum, Brno City Archive, the Moravian Regional Archive, the National Heritage Institute, the Moravian Gallery, the Technical Museum in Brno, and the Löw-Beer Villas Society in Svitávka.

Background textual information on the exhibition are provided alongside screens of period photographs and the design plans for the major public buildings and family houses of Brno during the 19th and 20th century. Two interactive screens give visitors the chance to look up more information in Brno Architecture Manual and in the Encyclopaedia of the History of Brno. The exhibition is also supplemented by two film screenings – a contemporary report on the Exhibition of Contemporary Culture from 1928 and a film collage depicting the appearance of Brno in the early 20th century. 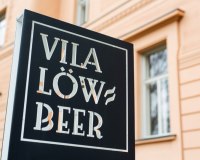 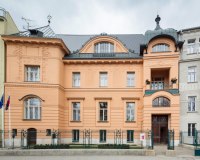 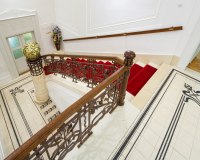 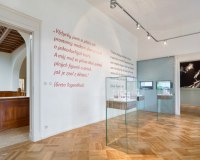 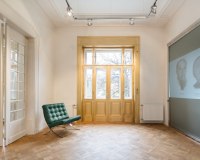 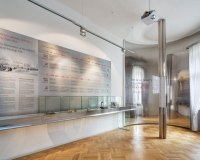 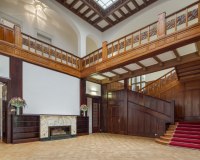 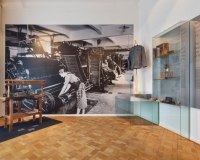